Armenia’s ancient history in winemaking and its favorable topography of high elevation and limestone and volcanic soil creates conditions for wine of incredible quality.

The history of wine in Armenia goes back further than, well, just about anywhere. According to the biblical narrative, Noah’s ark landed on Mount Ararat, which is one of the most recognizable symbols of Armenia’s geography. The vineyards Noah planted when the waters of the great flood receded would have been in the Ararat Valley, one of the winemaking regions of the current-day Republic of Armenia.

Slightly more recently, Armenia is also home to the Areni-1 cave, where a 6,100 year-old winery facility was unearthed, and remains the oldest excavated winemaking facility in the world. The winery consists of fermentation vats, a wine press, storage jars, pottery sherds.

Through more recent times, Armenia was recognized by Greeks and Romans as a place known for viticulture and wine, and during medieval times, historical documents show that wine was used as medicine, currency, festivities and in church services.

Much of Armenia’s historic winemaking regions were ignored after many years of turbulence, conquest and war, and during the Soviet period, winemaking took a back seat to brandy production.

Since Armenia gained its independence after the Soviet Union collapsed, a new generation of winemakers and grape-growers have ushered in a new era of re-discovery and renaissance. Ancient terroirs once ignored have been replanted, ancient vines have been tended again, and nurseries of ancient varieties pop up here and there. This rediscovery of the past is made all that more fascinating by a drive to introduce new knowledge and technology; borrowing from modern winemaking knowledge, new winemaking tools have been introduced to give these ancient varieties new life, creating wines that are at once old and new, traditional and modern.

This is the story Storica is here to tell; a tale of rediscovery and renaissance, through a category of wines that is yet to be fully discovered by the wine intelligentsia and consumers.

In Armenia, the vineyard soil is predominantly volcanic with some areas of limestone and clay in the south. Volcanic soils provide good drainage and encourage grapevines to grow deep to seek nutrients, resulting in the development of desirable flavor and texture compounds. Meanwhile limestone soil retains moisture in dry weather and offers good drainage in cold weather.

Armenia is rich in grapevine diversity, and it is believed many of the grapes in modern day wine making have their origin in the Vitis vinifera, a grapevine native to Armenian territory. Today, approximately 30 native grape varieties are cultivated in Armenia, with the most well known varietals including Areni (red), Khndoghni (red) and Voskehat (white). Armenia’s grape varietals offer diverse but familiar flavor profiles – for example Areni is called the “Pinot Noir of Armenia.” 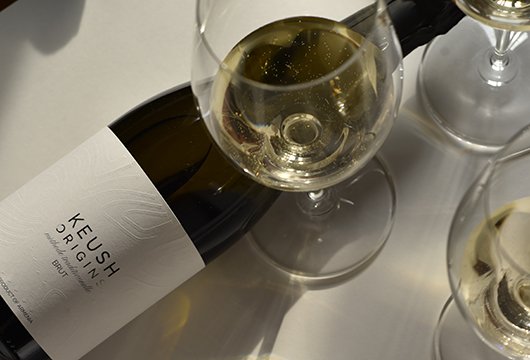 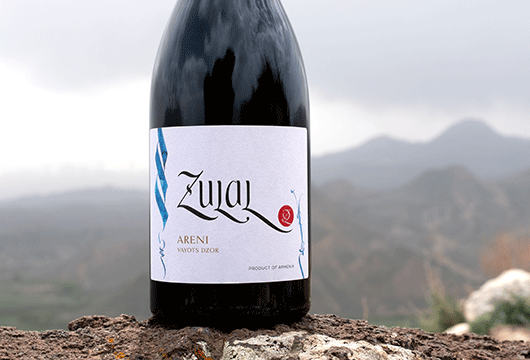 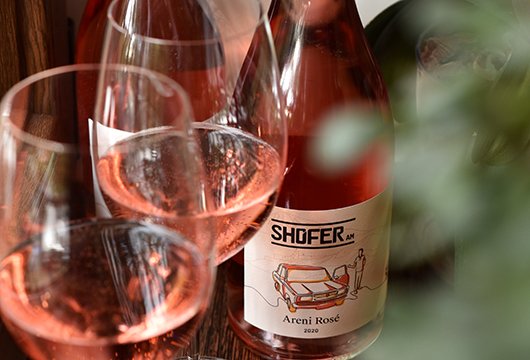 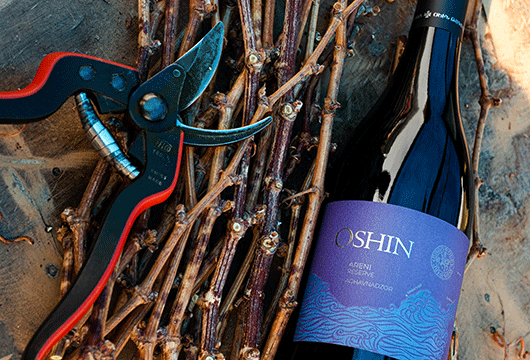 Oshin was founded in 2017 by Vahe Keushguerian, Vahe Gabrache, and Arman Manoukian. Oshin is a small production wine; grapes for Oshin are grown by 2 grape-growers in Vayots Dzor and grapevines are approximately 40-60 year old, yielding grapes that are ripe and deeply concentrated in flavor. Van Ardi translates as ‘Sun of Van”, referring to the ancient capital of Armenia where founder Varuzhan Mouradian’s ancestors are from. The winery is known for producing expressive, fruit-forward wines with complexity and balanced use of oak. Voskevaz is a family owned winery in the Aragatsotn region of Armenia. They work with quality-focused growers in various regions to source grapes for their ‘Karasi Collection’ wines; fermented in traditional clay amphorae (Karas) and matured in oak barrels. A perfect marriage of ancient and modern techniques, with attention to quality and detail.